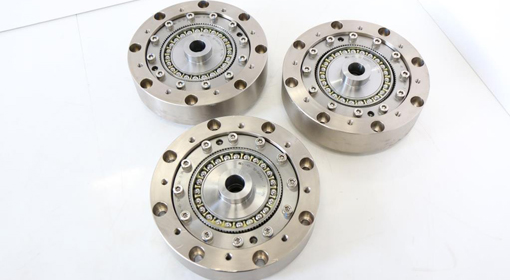 Harmonic Drive is the brand name of strain wave gear trademarked by the Harmonic Drive company, and invented in 1957 by C.W. Musser.

It is very commonly implemented in robotics today and used in aerospace as well, for gear reduction but may also be used to increase rotational speed, or for differential gearing.

The electrically driven wheels of the Apollo Lunar Rover included strain wave gears in their gearing. Also, the winches used on Skylab to deploy the solar panels were powered using strain wave gears. Both of these system were developed by The Harmonic Drive Division of United Shoe Machinery Corp.[citation needed]

The strain wave gearing theory is based on elastic dynamics and utilizes the flexibility of metal. The mechanism has three basic components: a wave generator (2 / green), a flex spline (3 / red), and a circular spline (4 / blue). More complex versions have a fourth component normally used to shorten the overall length or to increase the gear reduction within a smaller diameter, but still follow the same basic principles.

For a strain wave gearing mechanism, the gearing reduction ratio can be calculated from the number of teeth on each gear:

Thus the flex spline spins at 1/100 the speed of the wave generator plug and in the opposite direction. Different reduction ratios are set by changing the number of teeth. This can either be achieved by changing the mechanism's diameter or by changing the size of the individual teeth and thereby preserving its size and weight. The range of possible gear ratios is limited by tooth size limits for a given configuration.

The advantages include: no backlash, high compactness and light weight, high gear ratios, reconfigurable ratios within a standard housing, good resolution and excellent repeatability (linear representation) when repositioning inertial loads, high torque capability, and coaxial input and output shafts. High gear reduction ratios are possible in a small volume (a ratio from 30:1 up to 320:1 is possible in the same space in which planetary gears typically only produce a 10:1 ratio).