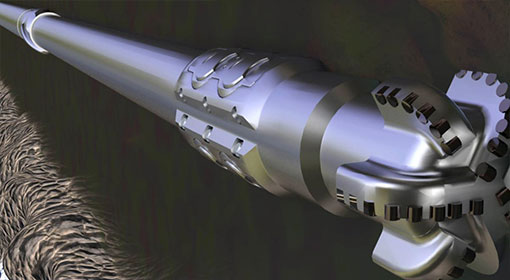 A mud motor (or drilling motor) is a progressive cavity positive displacement pump (PCPD) placed in the drill string to provide additional power to the bit while drilling. The PCPD pump uses drilling fluid (commonly referred to as drilling mud, or just mud) to create eccentric motion in the power section of the motor which is transferred as concentric power to the drill bit. The mud motor uses different rotor and stator configurations to provide optimum performance for the desired drilling operation, typically increasing the number of lobes and length of power assembly for greater horsepower. In certain applications, compressed air, or other gas, can be used for mud motor input power. Normal rotation of the bit while using a mud motor can be from 60 rpm to over 100 rpm.

Down-hole motors can be used successfully in conventional or straight-hole work, and are no longer limited to directional drilling. Recent development work and field tests involving hydraulics, bit design, and stabilization have defined the conditions under which down-hole motor costs and performance can be optimized in straight-hole drilling.

However, the motor did prove to be an economic and technical success as a directional tool. Since the early 1960's down-hole motors have performed thousands of successful jobs. They have been effective in drilling rat and mouse holes, in controlled directional drilling, side tracking, and hole straighteningall in a variety of formations both onshore and offshore.

Considering these advantages, recent developments in down-hole motors have again been aimed at straight-hole drilling. Key improvements in this direction have been in the areas of horsepower output and bearing design. These improvements have made it possible to increase both the penetration rate and the duration of the run to more nearly match the performance of the diamond bit. Development work is performance of the diamond bit. Development work is still proceeding, but a considerable amount of data can now be presented to illustrate the present state of the art.

The results of an extension field test are shown in Table 1, and provide the basis for an accurate comparison of conventional drilling vs drilling with downhole motors.