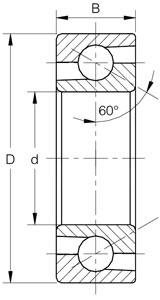 Angular contact ball bearings are particularly suitable for carrying combined (axial and radial) loads. Sometimes, they also can carry pure axial load and operate in higher speed. Under radial load, axial component force will be produced which must be counteracted. So the bearings are normally adjust against a second bearing.